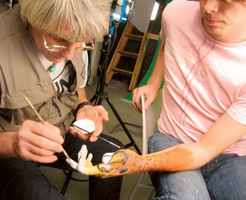 Guido Daniele is an extremely talented artist and his collection of “Handimals” is proof.

After attending art school he began working as a hyper-realistic illustrator in 1972 with many large promotional and advertising corporations throughout the world. After experimenting and trying a few different painting methods he found his stroke with body painting in 1990. What started as body painting for advertising pictures, commercial, fashion events, and other exhibitions has turned into more than Guido could have possible imagined.

The “Handimals” collection originally started when Daniele was hired by an advertising agency to do some body paintings of animals. Instantly he took passion in the idea. “I researched each animal in depth to see how I could transfer it to a hand, and then set about bringing it to life.” The first “Handimal” was the cheetah, and to this day is still his favorite. “It turned out perfectly the first time and gave me the courage to complete the rest of the set.”

Most commonly, Daniele uses his son (Michael James, 15) and daughter (Ginevra, 22) as his primary canvases. “If you’re spending hours on end holding someone’s hand, I’d rather it be the hand of someone I love. There’s nothing worse than working with a nervous, unfamiliar model whose hands are shaking.” On average the typical “Handimal” takes around three to four hours to paint in its entirety. However the first time Daniele painted the eagle with outstretched wings clocked in at ten hours upon completion.

Daniele admits that the hardest part is not the painting itself, but rather having to watch his paintings be washed down the drain and disappear on a daily basis. “I’m getting used to it. At least I get to start each day with a fresh canvas.”

For more information on Guido Daniele please visit his website.

Are you a manager? Looking to actively engage with your employees?

Let Lead Honestly help get the conversation started by sending you five questions to ask your employees 1-on-1 every week.

Be a Better Leader